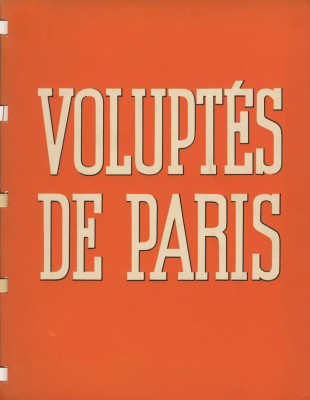 Anonymous text and 38 photographs, 37 of which are full page and captioned on coated paper. A mythical work on the Parisian night of the 1930s.

Scarcely is his work completed for the Paris by night, which Brassaï hastens to prepare the next one. He is caught up in an editorial bulimia that will never leave him. He signed a contract in August 1932: “In accordance with the terms of my second contract, I must take the photos before the end of November; for this work I will receive 2 francs a month, of which I have already received the first advance. "

He talks about it again in September: “I should also present new photos, planned for my second book, to my editor; the second monthly payment of 2 francs should be paid to me on September 000; but I hardly did anything. »And he continues his photographic wanderings in Paris. The series on balls, the "guinches" of the rue de Lappe dates from the fall of 5, when Paris by night was already being produced.

The first title chosen, quite explicit as to the general theme chosen, The Book of Love, is mentioned in May 1933 in a letter sent from Nice: “I will therefore have an excellent pretext to come back here, perhaps as early as this month. August, after completing The Book of Love. Time is running out and, back in Paris, I want to take the last photos. "On December 7, however, he still works there for more than a year:" I work mainly for the Minotaur and my book Paris Intime, that's the expected title. Apart from a few photos, it is practically ready, and it can be released in March [1934]. I would like Pierre Mac Orlan to write the preface. I have a feeling it will be at least as good as Paris at night. Maybe better. "

However, nothing happens between the spring of 1934, when the book was scheduled to be released, and the end of 1935, when it actually appeared. The editor, it is true, despite all their projects evoked with enthusiasm in 1932, is no longer the visionary Charles Peignot, but a very different character, Victor Vidal. Why did Brassaï not continue with Peignot? None of his biographers gave a precise explanation. A clue, however: the Arts et Métiers Graphique editions never returned the sixty-four negatives of Paris at night to him. This explains why he does not use them for any of his subsequent publications; it replaces them with variants. Brassaï always believed them lost and perhaps felt resentment. They were found in 1984, shortly before his death, by Kim Sichel, in the archives of Flammarion which had bought Arts et Métiers Graphique.

“For a few weeks now, I have been selling a lot of photos to Paris Magazine, the director of which, M.Vidal, loves my photos. He suggests that I publish a book on underground Paris. I sign the contract for 12 francs. I contact Mac Orlan, we meet in a cafe near the Gare de l'Est and he agrees to write the text. (I first dealt with Colette who liked my photos a lot, but felt the subject was too difficult). I will receive the 000 fr. in 12 monthly installments, as I deliver the photos. The rest, however, does not meet the expectations raised. In the fall of 000, more than two years after the first discussions, Vidal informed him that he was giving up the publication for lack of money. He offers to return his photos to him on condition that he reimburse him, which Brassaï cannot do. Vidal finally published the book a year later without warning him, without consulting him in any way, only mentioning his name on the last page under that of the publisher, printer and bookbinder. Voluptés de Paris appeared in fact at the end of 6 with an enticing preface which began as follows: “Paris, city of games and joys, paradise of desires, capital of Adventure!” and ends with an exhortation from a fairground hut: “Draw out, Gentlemen and Ladies! There is something for everyone, at the Grand Bazar des Voluptés in Paris. "

* up to 2 weeks after receipt,
in original packaging and condition

Delivery for other countries

> All works by Brassaï